Skip to primary content
Another great guest blogger, Mike Griffin is based in Seoul and is a key figure behind the blossoming #KELTchat, an ELT chat for teachers in Korea. He’s also got an unmissable, ‘must-read’ blog. I’m so glad he agreed to write for Take a photo and…, particularly as he hasn’t actually used ELTpics much, and it’s wonderful to see the thinking through of how he could actually incorporate the resource. Have a read and then please do add your own thoughts in the comments box below. How could YOU use ELTpics? Over to Mike:

***********************************************************************************************
I’ve  never even owned a camera. Well, there was that one time I borrowed an old one from my sister just before departing on a trip sometime in the late 90’s. I promptly lost it and have never gotten around to buying another one. I guess I am not really all that into photos or photography. Most likely, you didn’t click on the #ELTpics website to read about my history with photography so I will stop there. I noticed #ELTpics quite early on in my journey with social media for professional development. I don’t think it is much of a coincidence that the folks most involved in #ELTpics are such great connectors, role models, bloggers, photographers, sharers, and, indeed, people. I thought they were doing cool stuff before I was actually fully aware of #ELTpics. I thought it was a brilliant idea before I really know what it was about.  When I figured out (by “figured out” I mean I took 2 minutes to read the blog) what #ELTpics was about I loved it even more. I was inspired to get involved and to use the site as much as possible for my classes. Unfortunately, I haven’t quite managed to use #ELTpics much in class for a variety of reasons (mostly related to a lack of internet in certain rooms and a lack of projectors in others and a lack of pre-planning coupled with a surplus of laziness on my part).
I have actually only used #ELTpics in class once. Just once in 18 months. A question came up in class (in a classroom that had easy internet access) and I remembered seeing a picture (from @aclilltoclimb, I believe) I thought would help clarify things a bit. I took a minute or two to find the picture I had seen a few days before, found it, put it up on the screen to the knowing nods of approval from my students. That is my one and only experience using #ELTpics in class so far. I hope to try out a few things in the next few months and I will mention some ideas I have for this later on in this post.
I have used #ELTpics for blogging a few times. Among my favorites was this one by Victoria Boobyer.

Image by Victoria Boobyer at ELTpics

It was great to search by emotion and find exactly what I was looking for!
I have also used #ELTpics for presentations from time to time and I greatly appreciate it as a resource. A lot of the photos are breathtaking and provide a nice respite from Powerpoint slides filled with words.  In a recent presentation I was able to use #ELTpics photos to spice things up. Since the audience sort of “ohhed” at times when I changed slides  I think they had the impact I was hoping for.
(Photos by @annehendler)

Both images contributed by Anne Hendler

As you can see the original photos (below, by @nina_septina and @theteacherjames respectively) are much more beautiful and striking without me in them!

Image by @nina_septina at ELTpics 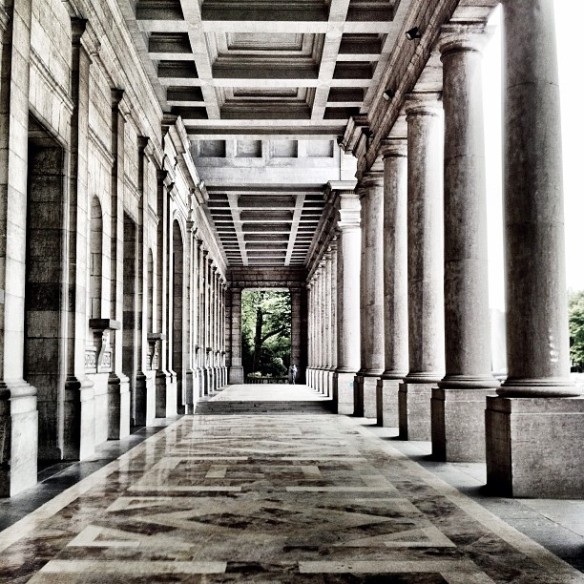 I am keen to try out #ELTpics in class and I have been bouncing ideas around in my head for a while now. I have three main ideas I’d like to share.
1) The first idea is related to having students do a pecha kucha using the pics.  Instead of simply having students use the pictures to create their own pecha kuchas (which is a fine idea itself) I would like to add a bit of a twist. Instead of students choosing their own topic and scouring #ELTpics for pictures to match it, I would like to flip this around and have other students organize the slides for their peers. This means that the speakers could get a set of slides that is intentionally random. I think this would promote a lot of creative thinking and fun. I also think the considerable challenge of the task could act as a way of relieving stress because the task is already hard so students might feel that they can just give it a go and have some fun with it. I am already imagining students deviously creating a collection of pictures with no apparent connection. I might consider adapting it to 10 slides rather than the standard 20 for this. (Shout out to Alex Walsh, who I discussed a similar idea with in relation to as yet to occur inaugural #KELTchat Conference. Actually, our idea was even more devious, speakers would not have any time to see the slides before doing the pecha kucha and would have to speak extemporaneously as the slides appear. Not for the faint of heart.)
2) One activity that I like to do from time to time in class is to choose three or four related words and ask students to choose the “odd one out.” I was thinking it might be fun and useful to do the same with pictures. The #ELTpics collections could be particularly well-suited to this activity. I am imagining printing out the photos or just having them on screen and asking students to select the “odd one” and explain why they have done so. I can imagine students would have a wide variety of criteria and this might be a nice, safe nudge to have students explain the reasons for their decisions.
3) I love having students and training course participants make posters in class. I like it for English classes and like it even more for teacher training sessions. This is something I started doing in the past few years and I have probably gone a bit overboard at times with it in terms of frequency and duration. Perhaps #ELTpics could be a part of my poster creation toolkit. The first idea that comes to mind is to have students/trainees  choose pictures  from the site and print them off and add them to their posters. The second, more digital idea, is to have students create a digital poster. Of course a picture from #ELTpics could figure prominently in the design. Part of the reason I am so interested in doing this with training course participants is because here in Korea public school teachers are typically expected to have flashy presentations and I think an eye-catching picture from #ELTpics would surely fit the bill.
Unfortunately,  I don’t think most teachers in Korea are familiar with this great resource. I am adding this to my goals. In addition to trying out some ideas in my own classes I am hoping to introduce more and more teachers to #ELTpics. Thanks for reading and please wish me luck  with my goals. I will be sure to report how it goes. Much gratitude, respect and love for everyone involved.
(Picture by @senicko)